One thing you will find about me is that I am a big sucker for sci-fi. I don’t even take sides when it comes to Star Wars and Star Trek — I love them both (Ok, I tend to lean towards Lightsabers, but don’t tell Picard). However, it seems that Star Wars has always received far better treatment in the past when it comes to games emulating universes. Not only is there an assortment of great licensed content (KOTOR, Shadows of the Empire and Jedi Academy/Outcast, just to name a few), but some truly inspired works of sci-fi worthy to be called successors. Hell, Wing Commander even featured Mark Hamill.

But when it comes to Trek, it’s mostly been a long line of disappointment.

So, naturally, when a space game comes along featuring strategic crew and ship command over FPS blasting, fantasy-style RPGs, and balls-to-the-wall dogfighting (not that any of those things are particularly bad, just often overused), I perk up in the hopes that perhaps, some sci-fi fans have created a game favouring tactics and decision making (aka, the role of a ship captain). FTL not only does exactly that, but does it in a way that is fun, exciting and effectively resurrects the idea that a good game needn’t be long if it ecstatically invites you to play it over and over again.

Don’t be fooled by its visual simplicity. It’s a game developed by a two man team, and its graphical appeal doesn’t stray past flash-based browser games, but it more than makes up for it with raw content and game-play. There is a significant variety of ships with multiple configurations each (many of which are unlocked by completing the game under varying conditions), as well as a wide array of upgrades, weapons, and crew randomly dropped in your path as you progress.

Combat is real-time, and involves making all kinds of decisions like which doors to open and close, which weapons to fire, where to send crew and which damaged systems to repair, all the while trying to prevent your enemy from escaping (unless if course, you’re the one trying to get the fuck out). Thankfully, they let you pause combat to take a breath and survey the horror which has been laid upon you.

While the story is quite linear and you only get to pick one ship per play, no two plays are ever alike, even if you consistently play the same ship and configuration.

The linear progression seems like it would get repetitive, but it doesn’t. The randomly generated maps and star charts consistently give you new experiences as well as the ability to choose your path to the end. Plus, the enemy is chasing you the whole way, giving you a sense of urgency. You don’t have time to linger and explore the whole area. You must be decisive, and that’s one of the little things really going for it.

At the same time, the game is completely unforgiving. It’s hard. Really hard. Even if you do everything right, there’s no guarantee you’ll make it to the end with what you need to beat the big boss. Half the challenge of the game is ensuring you upgrade your ship adequately along the way. You’ll need enough weapons to defend yourself, enough technology to endure the journey, and the crew to run everything. Sometimes, you’re happy just to get to sector 8 alive — because If your ship blows, you start again from the beginning. Even on Easy mode, one careless move means you’re back to the title screen. For me, this gives the game a level of rewarding and satisfying play unmatched by the trend of die-res-die-res repetition found in many so-called “AAA” titles. A real sense of loss gives the game a real sense of challenge and an even better sense of accomplishment when you get to the end.

Can it be frustrating sometimes? Absolutely. But we also feel most passionately about the things we enjoy most, even if it sometimes comes out a little… hostile.

FTL provides more hours of game-play in a compact package than many $60 games with a massive budget and graphics engine. They even threw in a free expansion which not only provided more reason to play again, but managed to significantly improved on an already dynamic and diverse experience. I really can’t say enough about how much I enjoy this little game. I find myself drawn back to it again and again because there aren’t many other games like it. It’s found itself in a unique position of filling a gap left by many and attempted by few. It may not be perfect, but I anticipating it inspiring more games like it in the future, while making its mark in history as having done so. 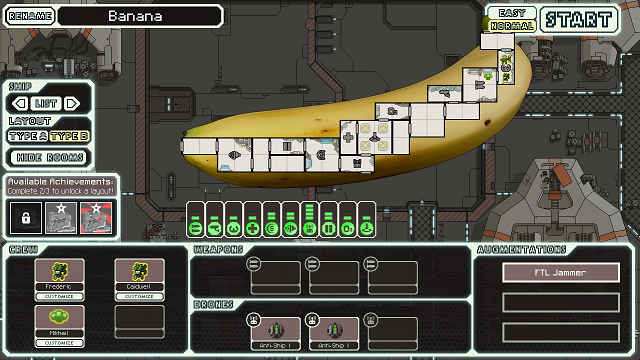