My day of reckoning has arrived early, it seems. More than two weeks ahead of schedule, Uber Entertainment has canceled funding to their most recent RTS title, Human Resources. As most of you already know, I called this a few days after the Kickstarter was launched. With shoddy communication, and a lack of commitment to their previous titles, it was no surprise to me that this decision came early.

However, I’m not here to shout “I told you so!” to my critics, but merely to document my experience with Uber and covering the drama. Something to do with journalism and trying look like I know stuff rather than making a lucky guess. Over the last few days, I’ve been active on the Planetary Annihilation subreddit and even received a response from Uber staff. While the future of HR is likely over, Uber may yet redeem themselves. 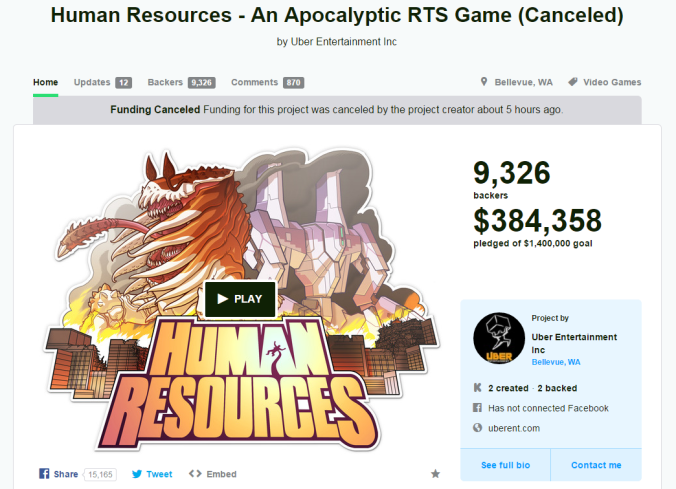 Since I’ve already said as much I’m going to say about Uber’s failure to communicate and lack of realistic concern for their own reputation, I will focus primarily on the last few days of Uber’s push to get more support.

It all started when I got an email from Uber (as a customer of Planetary Annihilation) showing desperation for pledges. Uber’s making one last ditch push. It seemed to work. They actually managed to get their dwindling support to more than 7x what they were getting. But this was already too late in the game. Getting from $5k/day to $35k/day when you realistically need at least $50k/day just to reach the goal line isn’t enough to make a difference. Plus, sticking a limit on $1 donations to prevent dissenters doesn’t exactly make you look good. 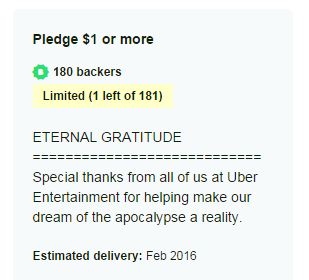 I happened to notice nearly the moment after someone made this decision. As the plucky pot-stirrer that I am, I headed straight to reddit and posted about it. Went right to number #1. Within an hour, they removed the limit.

It seemed that was finally enough to get Uber to come down from their thrones of ambiguity to actually talk to people and gauge the community. Of course, still too late to come out ahead, but I was actually able to get some dialogue with Planetary Annihilation’s Director of Production, Jeremy Ables. Here’s an excerpt so you don’t have to dig through a long thread:

Does any of this mean that Uber is actually listening? Well, the “Weekly Discussion” changed within 24 hours of my saying that asking about “anticipated features” should have been a question for beta period. It is now, “What can be done to better balance Naval?” which is a topic the community has been complaining about since well before the game was launched.

So in the very short term, I can say with certainty that Uber is indeed listening. They can’t afford not to. It’s not going to bring Human Resources back to life any time soon, but it may pull Planetary Annihilation out of its abysmal launch woes.

As my last words, I’d like to say that I write this not with arrogant confidence that I was right, but with genuine concern for the gaming industry. While Uber may have learned from their mistakes, I fear others will not, and this trend of developers failing due to lack of touch with their community will continue. I write only in the hopes that my words may inspire some not to follow in their path…Or you know, because it’s fun. Fuck yeah.

4 thoughts on “Something, Something Game News – How not to Kickstarter: A Final Word on Human Resources”