It recently occurred to me that the so-called “next-gen” consoles (PS4 and XBONE, specifically) will have been released for a whole year in two months. Now, I don’t have much experience with either console as I don’t own them, so I don’t pretend to be an expert on their daily operative functionality. However, I will be spending the entirety of this entry explaining why I have no interest in them at all, and will likely never own one. Aren’t you excited?

Instead of my typically cheeky image, let’s start with a short video from ReviewTechUSA:

Since I know some of you didn’t bother to watch (I know, 7 minutes seems like a long time on the internet), the general point of his message is that the XB1 and PS4 are woefully antiquated for their generation. His main argument is that they aren’t at all prepared for 4K picture quality as “4K is here.” I’m a little hesitant to agree with that particular assessment as nothing else is ready for 4K either, aside from PC towers for which the average person would need a loan. BluRays aren’t in 4K, TV isn’t in 4K, YouTube and Netflix certainly aren’t either, so I’m not jumping on the 4K bandwagon just yet. I give it at least another 2-4 years before we really start seeing those kinds of resolutions from general media sources.

However, I completely agree with his overall sentiment. 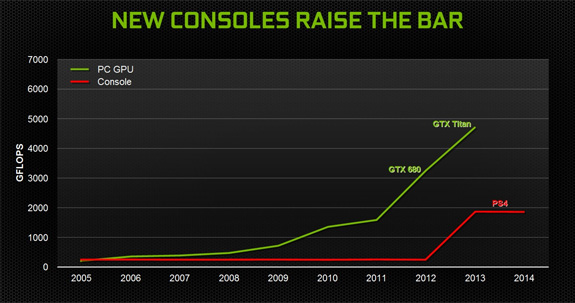 Remember the difference between SNES and N64? Or even the difference between N64 and Gamecube? Hell, the difference between PS2 and PS3. It was always easy to be blown away by the new generation because it was always mind blowing how much better the graphics were. The first time I saw a PS4 demo at my local game shop, my first reaction was “meh.” While I was never a big playstation fan myself, I couldn’t deny the difference in graphics between the PS2 and PS3 was impressive. Yet, I’ve been playing games on my tower that look better than games on the PS4 since before it even came out. Not only that, but they have to keep showing us side-by-side comparisons of 360/XB1 and PS3/PS4 versions of the same games just to convince us of how much different they look.

Yet, that’s still not really the point I’m trying to make here. I could go on and on about how underpowered the technology is, and talk about bytes and hertz and screen resolutions, and blah blah blah… but this is a tired argument and frankly, the biggest reason why people hate the PC gamer community. It’s also not the main reason why I am avoiding the “next-gen” consoles.

Where am I going with this?

The new consoles have no games. It’s been a year, and neither one has any exclusive games worth upgrading for. All of the most anticipated titles are cross-platform (i.e. Destiny, Titanfall, etc), and no-brainer re-releases like The Last of Us HD should have been a launch title rather than an after-thought.

Meanwhile, the Wii U, having been the wet blanket of the console industry until two months ago is now dominating the XBONE in sales. Mario 3D World is also an impressive release, as is nearly every Nintendo first-party title. Throw in the hot items for 3DS such as Link Between Worlds, Fire Emblem: Awakening, Pokemon X/Y, etc, and suddenly Nintendo doesn’t look like such a chump. While they have the weakest hardware technology, they have the best list of exclusive games. You don’t need a PS4 to play the latest Call of Duty or Assassin’s Creed.

All the while, the PC market is flooding with incredible indie titles foregoing the idea that you need a big franchise and a big publisher to make a good game that makes good money. Analysts suggest the PC market is already overtaking the console market.

Now, I’m not crying doom and gloom for the console market. I don’t think the PS4 and XBONE are going to die, and I don’t think the PC market is going to make a huge surge and suddenly become the main box in everyone’s living room. What I’m saying is that Sony and Microsoft seriously need to rethink their product strategy. The PS2 was the highest selling console ever because it also had the most diversity in games, and particularly exclusive games. The big companies aren’t infallible due to their legacy in the market.

All you have to remember is that Sonic now lives in Nintendo’s eStore.