It’s no secret that Pokemon Go has become an earth-shattering success in an absurdly short amount of time. The game was released on July 6th — just one week ago, and it has an estimated 15 million downloads and counting. That’s over 2m a day, and it would be a fair estimate to suggest it will hit 20m by the weekend. It’s already seeing more use than mainstream social media apps like Twitter and Facebook, as well as other top game installs like CandyCrush and Slithr.io, with not only more total active users, but also longer time spent using the app. In just 7 days, it has become the biggest mobile game in history.

From the rampant reports of server problems and security concerns, it’s safe to say that the relatively small-time developer (not for long), Niantic wasn’t ready for the kind of reception it has received. Even in countries where you can’t even officially download the app from the Play, or iOS store, people are still managing to get their hands on installers and running them anyway.

But can you really blame Niantic? I mean, their previous works weren’t exactly unsuccessful, but they were little more than a creative indie team with an interesting geocaching game not entirely unfamiliar next to their Pokemon themed successor (in fact, some clever fellow has figured out how to use it to find Pokemon). Maybe Nintendo weren’t entirely prepared, either. With lackluster sales of the Wii U, it seemed all but likely that Nintendo may be headed towards leaving the hardware business altogether. The dynasty has seen better days and maybe it was little more than an experiment to see if their interests in AR could really pay off.

Well, we were ready, weren’t we?

As if a flood washed over all of popular media, suddenly everything Pokemon. Perhaps helping as an escape from recent events… well, everywhere it seems… ages ranging from, hell, everyone. Kids to old folks. Hardcore fans of the series, and people who’d never heard of it before.

Cops hanging out with teenagers… 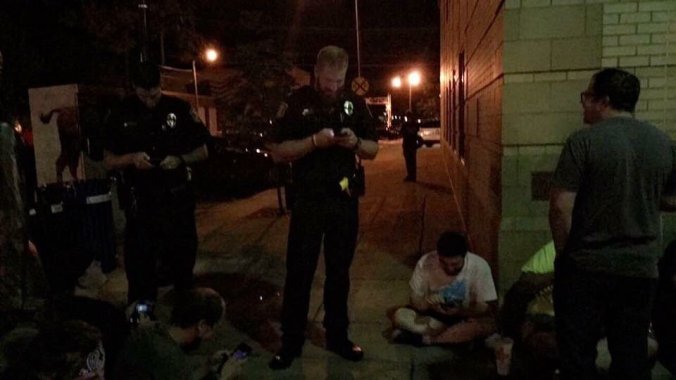 And a rainbow of others across so many spectrum. It’s hard to name a demographic that isn’t running around in the streets being more social than one could have imagined while having their faces buried in their phones. It’s fucking incredible. I dare anyone to suggest otherwise.

It’s probably a fair assumption that Nintendo is pretty excited about it, too, considering it’s raised their company’s value by well over $10 billion in the past week, and is raking in hard cash at a rate of $1.6 million per day, just on iPhones alone. Worldwide Android data isn’t in yet, but a safe estimate wouldn’t be much shy of 10 million or more. With a dominant user base expected to rise, it’s likely that those numbers will continue their upward trend. For how long, it’s hard to say. At the very least, if Nintendo and Niantic are wise, they will ride this tidal wave and continue to to develop and improve the app with features and content. There’s no denying they have a gem here, and the best thing they can do is exploit it more than a diamond mine in Africa.

Just over 30 years after the NES was born, Nintendo has once AGAIN flipped a whole industry upside down. It doesn’t take a psychic-type (ha) to predict there will be a tsunami of clones and imitators. Competitors certainly aren’t about to ignore the rampant success, and you can already see every other kind of business jumping on the bandwagon just to get a taste of that Pokemon money.
Will this instantaneous phenomenon conjure a brighter future for Nintendo? Perhaps. It might be a bit early to say, but it would be foolish to withhold from the grandfather of gaming the benefit of the doubt. Nintendo has never been shy at taking a leap with a new idea, and it’s one of their best qualities. Gaming as we know it just wouldn’t be the same, and it’s on the precipice of change yet again, thanks to the one company who has never been afraid to be the outlier, and will continue to fill the treasured childhood memories of generations to come.

One thought on “Something, Something Game News – Pokemon Go: Nintendo’s guide to making money”