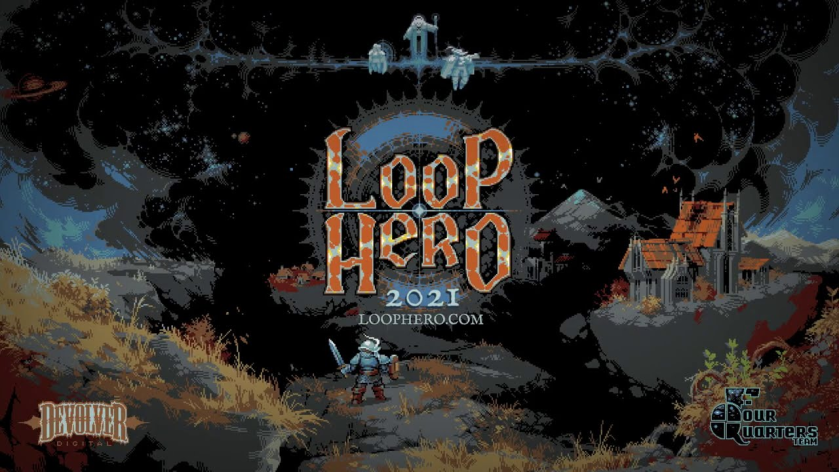 So I bought Loop Hero a few days ago, and can’t seem to do anything else. I’m not the only one, either. While it hasn’t blown up quite to the extent of Valheim, which is an unstoppable machine of unrelenting consistency, it’s doing quite well for an indie game quite intentionally designed to look like it was made 30 years– so much so that it even has a CRT scanline filter.

In its first week, it sold over 500,000 copies, and sits at a 95% with nearly 10,000 “overwhelmingly positive” reviews. It rocks a very consistent 40,000 simultaneous players, which is pretty good for a roguelike, reverse-tower-defense, deck-builder. I know, it’s confusing just saying it. It’s a game that’s hard to describe, and even harder to illustrate with images. Even following a guide wouldn’t make much sense without actually playing the game yourself, and it’d probably be pretty boring to watch a play-through.

Yet, this is probably the most innovative game of 2021, so far.

I’ll do my best to break down what makes this such a hit.

First, you take two, simple, recognizable and ancient game formulas and flip em. Especially the tower defense part. Like a TD game, you have a set path of travel, except you are the character on the path, and baddies spawn to impede your progress. You place towers along the way to give you bonuses and resources to collect, but they also act as spawners, increasing the number and variety of monsters in your path. The point of it all, is to complete as many loops as you can before returning to your homestead, where you use the resources you acquire to build up your base, unlock new items and classes, so you can return to the loop to gather resources so you can continue to upgrade your base. It sounds repetitive–and it kind of is–but it’s also marvelously addictive.

The roguelike elements are present, in that every loop is unique, and you start fresh at level 1 every time. Death is not nearly as punishing as most games, and often serves as a narrative punctuation, and you even still get to keep at least 30% of what you gathered, or more if you have the right items which protect your losses. So, while it is technically a roguelike, the elements are more of a gameplay mechanic, rather than simply your main incentive to stay alive.

So far, it probably all sounds pretty straightforward, right? Do loops, get loot, repeat. Yet, somehow I’ve already done this for 35 hours in 3 days, so there’s something in there keeping me going, and it’s the depth.

This game is way deeper than it appears on the surface, and even with the amount of time I’ve put in, I still haven’t figured out all the potential tower combinations that exist. Like many other tower defense games, you can combine the effects of towers to either help you, or hinder the enemy, or sometimes vice versa and both. However, these effects are not immediately obvious, and exist nowhere in the game’s description or lore. When you unlock these combinations, they are described in the in-game encyclopedia, but you will not be instructed on how to make them.

This leads to complexity of gameplay I never thought possible from a tower defense game. Suddenly, I’m not just arbitrarily looping to unlock better gear and new buildings at home, but I’m doing it to make new discoveries about how the game works. For such a seemingly simple game, I’ve never had so many, “ooooooooh,” moments, where I realize how to modify or improve my gameplay techniques.

This is the spark of creativity. Not just from the developer, but also for the player. It’s why people like crafting games. People like being given choices, and opportunities to build and invent. It’s not just sandbox-y, player freedom, it’s the feeling that your creative choices make you better at the game. That’s a magical feeling. Loop Hero pulls off that magic in such a way that it somehow feels like it’s reinventing the wheel with mechanics that aren’t all that new. It’s almost like if someone just flipped a tire inside out and realize this could be a whole new way to get around.

Which is perhaps why it’s so appealing. There’s nothing here that should be entirely unfamiliar to the seasoned gamer. The basebuilding is fairly straightforward, but open-ended. You have a large grid, and you can place most buildings wherever you want within reason, and within a certain radius of other buildings. The deck-building is simply picking the bonuses and towers you want to show up in your hand while you’re looping. Collecting loot and leveling up in the game is straightforward, increasing in loot rarity and monster difficulty every time you start a new loop. Combat is simply watching your character attack, while you sort out which items you’re using.

Yet, there’s also no other game to compare this to. It has somehow taken so many familiar elements of game design, and made something entirely new. This isn’t a clever homage, or a throwback, even though it looks like it is.

What it is, is something that will inspire a new genre. I am quite certain we will soon see Loop-likes, and I am here for it.